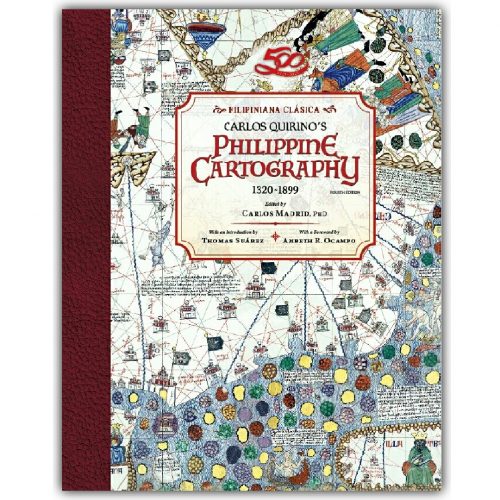 In this landmark history of the making of the Philippines, National Artist Carlos Quirino recounts how the concept of the Philippines emerged as a vague grouping of islands in the early fourteenth century and evolved in fits and starts over half a millennium into its current iconography. The Philippines as a geographical and ideological construct was shaped by a long lineage of cosmographers, cartographers, and artists spanning diverse cultures and times, such as Zhu She Ben, Luo Hong Xian, Abraham Cresques, Francisco Rodrigues, Juan López y Velasco, Diogo Homem, Gerardus Mercator, Sebastian Münster, Robert Dudley, Comte de Lapérouse, Pedro Murillo Velarde, Claudio Montero, Francisco Coello, José Algué, and many others. From ancient Chinese scrolls, Japanese and Portuguese portolan maps, French scientific surveys, and British merchants’ nautical charts, Quirino weaves a history of heroics and everyday drudgery, of personal and international rivalries, as well as of egregious mistakes and brilliant insights.

Now entering its sixth decade, Philippine Cartography was first published in a limited edition in 1959 and reissued a second and third time in Amsterdam and Quezon City. For this fourth edition, editor Dr. Carlos Madrid annotated Quirino’s text and added a selection of over 450 new maps to form the largest bibliography of over 1,600 Philippine cartographic materials. Dr. Madrid also appended three significant essays that considerably widen the author’s avenues of inquiry into the Selden map of Southeast Asia, the unheralded Claudio Montero and his Comisión Hidrográfica de Filipinas, and the world-class achievements of Jesuit father Vicente Memije together with two Filipino artists, Nicolás de la Cruz Bagay and Lorenzo Atlas.

Profusely illustrated with over 200 images, this edition is further enriched with six remarkable foldout maps, among them the outstanding Topographía de la Ciudad de Manila, which is reproduced for the first time in high resolution. This edition is also specially honored with a foreword by renowned historian Ambeth Ocampo and an introduction by international author, Thomas Suárez, who presents a meditation on cartography, the making of the Philippines, and twenty-first century digitality.

With its erudite text and unparalleled reproduction of rare maps, views, and plans, this book will delight anyone with an interest in antiquity, history, geography, and maps as instruments of power and rare vessels of beauty.

Carlos Quirino’s Philippine Cartography remains the landmark work for the study of the mapping of the archipelago. Quirino…challenged the Eurocentric attitude that was still the Western norm. This new edition continues where he left off, updating, correcting, supplementing, illustrating, and expanding upon the history of the mapping of this archipelago that is as complex in its geography as it is rich in its
art and history.

—from the Introduction by Thomas Suárez,
author of The Early Mapping of Southeast Asia

This fourth edition of Philippine Cartography, updated and greatly expanded with references to manuscript maps, shall serve as a primary reference book of Filipiniana cartographic materials for many years to come.