More Hispanic Than We Admit 1 (SB) 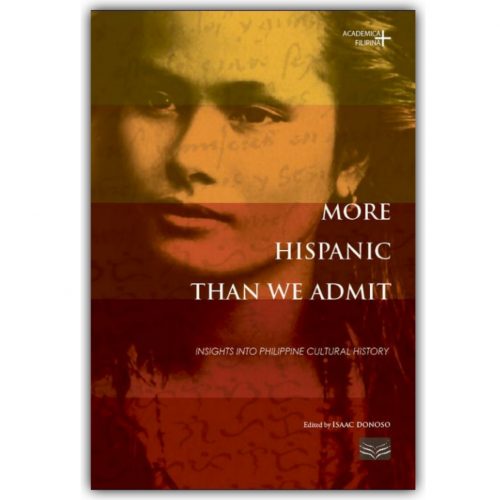 Edited by Isaac Donoso
With a foreword by Reynaldo C. Ileto
Published by Vibal Group, Inc., ©2008.

An extended meditation on the encounter between the native and the foreign, this compilation of scholarly essays on Philippine culture and history provokes discussion on the fascinating and sometimes uneasy hybridity that is the Philippines. Spanning an eclectic range of disciplines including anthropology, religion, sociology, philology, literary criticism, historiography, film and art studies, political science, and economics, the compilation traces the manifestations and paradoxes of hybridity by exploring the processes of cultural interaction and transformation.

The book argues that, although subjects of the colonial enterprise, Indios criollos had primacy of agency. The hegemonic cultural discourse invited a counter-discourse that was subtly crafted by emergent Philippine culture.

More Hispanic Than We Admit recuperates our Hispanic past and inspires a continued and lasting engagement with Hispanic Philippine studies.

One may remove the Indonesian, Chinese, or Japanese cultural influences that form the Filipino’s personality today and the Filipino will still be recognizable as Filipino. But if one removes the Hispanic roots of his society and his culture, the Filipino will cease to be what he is. It is false nationalism to deny that we have been deeply influenced by Christianity colored by Hispanic culture. We are more Hispanic than many of us are willing to admit.