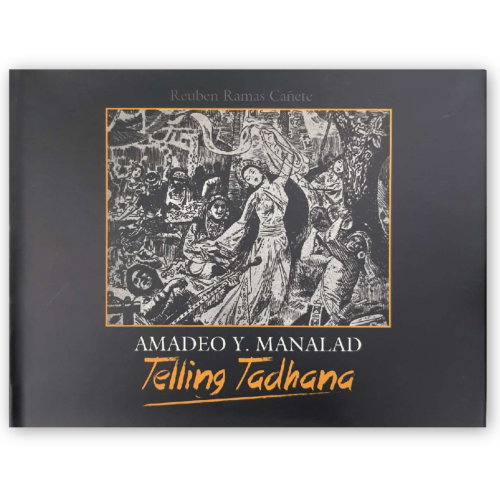 The book discusses the illustrations of the Filipino artist Amadeo Y. Manalad that depicted certain historical episodes narrated in turn in Tadhana: History of the Filipino People. Authored by President Ferdinand Marcos, the book, writes Professor Canete, aimed to “recapitulat[e] the history of the Philippines based on the perspective of a Filipino nationalist, but one who simultaneously was also is its unarguable leader, the President himself” (15). The book “form[ed] a pro-Filipino viewpoint about national history that rejects the imperialist attitude and colonial mentality….without being anti-foreign and anti-establishment” (15). Volume 1 and Volume Two, Parts One and Two of Tadhana were published between 1976 and 1980.

The illustrations in the Tadhana book itself were done by Rod Perez Cruz, but President Marcos, writes Professor Canete, knew “keenly that his narration of Philippine history, if confined into print, would only be read by a small percentage of the Filipino population.” The president “…..must have concluded that using the illustration format for newspapers in translating Tadhana into a more visual and comprehendible narrative would enhance the effect of this work, and popularize the rendition of history through a format that was already familiar to millions of readers” (16).

This popularization was done through Manalad’s pen-and-ink illustrations, which were all published in installments between May 1978 and October 1978 in The Sunday Express. There were seventeen installments featuring 99 illustrations that “cover[ing] the years between 1565 and 1663” and depicting events described in Volume Two, Part One of Tadhana. This volume “focuses on the early part of the colonization of the Philippines” (24).

In addition to the pen-and-ink illustrations, Manalad finished 40 charcoal and 15 red-pencil illustrations by late September 1980, “all of which were based on designs that he adapted from his pen and ink illustrations of the Tadhana series for The Sunday Express” (25).

Analyzing the illustrations individually and collectively — in terms of form, medium, and artistic and historical significance —  Professor Canete writes that “Manalad’s illustrations go beyond the narrow confines of historical explication by imagining the Tadhana’s scenery through the lens of artistic practice…..[The illustrations] had to “be imagined and composed in order to bring historical texts closer to what the reading masses would image or accept as “the truth,” a verisimilitude informed by decades of illustrational practice…” (23), such as that in komiks.  Most importantly, Professor Canete writes that Manalad’s “sense of patriotism and nationalism as a Filipino” is evident in the latter’s illustrations, which recover the “‘lost voice” of the native “that never speaks” in the Spanish accounts” of Philippine society.

Telling Tadhana is published by Saga Publishing and has a limited print-run of 500 copies.