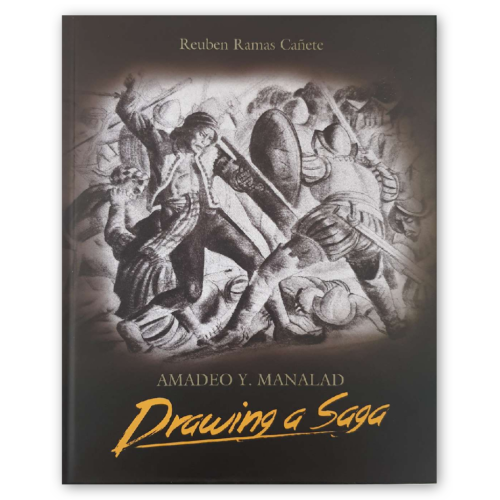 “Amadeo Y. Manalad: Drawing a Saga,” a book by Dr. Reuben Ramas Cañete, UP Artist and Professor at the Asian Center, University of the Philippines Diliman, has been launched recently by Saga Publishing, Philippines.

In the book, Professor Cañete examines Manalad’s contributions that form part of “The Philippine Saga,” an ambitious collection of 481  “illustrations, portraits, photographs, and maps” that collectively provides a grand sweep of Philippine history from the Pleistocene era to the Philippine-American war.

First published in serial form in The Evening News in 1947 and based on texts by the anthropologist, H. Otley Beyer and historian, Jaime de Veyra, the illustrations of the Philippine Saga were later compiled in a book.

“Drawing a Saga” reproduces Manalad’s 262 compositions, all of which Manalad remarkably completed in a month; sixty-seven are original while the rest are renditions of other artists’ work. The book also contains Professor Cañete’s discussion of the Saga’s historical and artistic merit; he examines the style, medium, and other formal elements of Manalad’s illustrations,’ which betray the influence of modernist art and Muralism.

He notes that “the ink wash renderings are equally vivid. Their strong sense of line, heightened by tonal contrast between black and white, with strategic uses of ink wash, creates an almost relief-like quality…” (23). And “his neo-classical use of line, stable pyramidal composition, balance, and symmetry would be unmatched in modern Philippine Art” (37).

Professor Cañete also looks at Manalad’s “post-war career from muralist to master illustrator” and highlights the political significance of his illustrations, which were commissioned as part of popular nation-building efforts in post-War Philippine society.