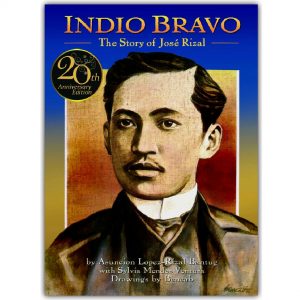 As a young girl, Asuncion Lopez-Bantug Rizal sat on her uncle Paciano’s lap and asked him to tell her stories abut his brother, Jose.

Ms. Bantug, the granddaughter of Rizal’s elder sister Narcisa, was her family’s journalist and chronicler. Fondly nicknamed “the little question box,” she plied her relatives for their recollections about Lolo Jose. Over the years, she copiously filled notebooks with details about the life of our national hero. For over seventy-five years, Ms. Bantug’s memoirs have served as the basis for many of the stories historians have told about Rizal.

In 1938, Ms. Bantug won third prize in the Commonwealth Biography Contest for the life story she penned about her granduncle. In 1997, Tahanan Books assembled a powerhouse cast of talent to turn Mrs. Bantug’s manuscript into a biography tailor-made for young people. Co-written by Sylvia Mendez Ventura, herself a master writer of nonfiction, and edited by Nick Joaquin, the book showcases the stunning drawings of National Artist for the Visual Arts Ben Cabrera, also known as BenCab.

Now, a handsome twentieth anniversary edition, with a foreword by Ambeth R. Ocampo, INDIO BRAVO: The Story of Jose Rizal offers a new generation of young Filipinos a vibrant portrait of the man whose appointment at Bagumbayan ultimately paved the way for Philippine independence.